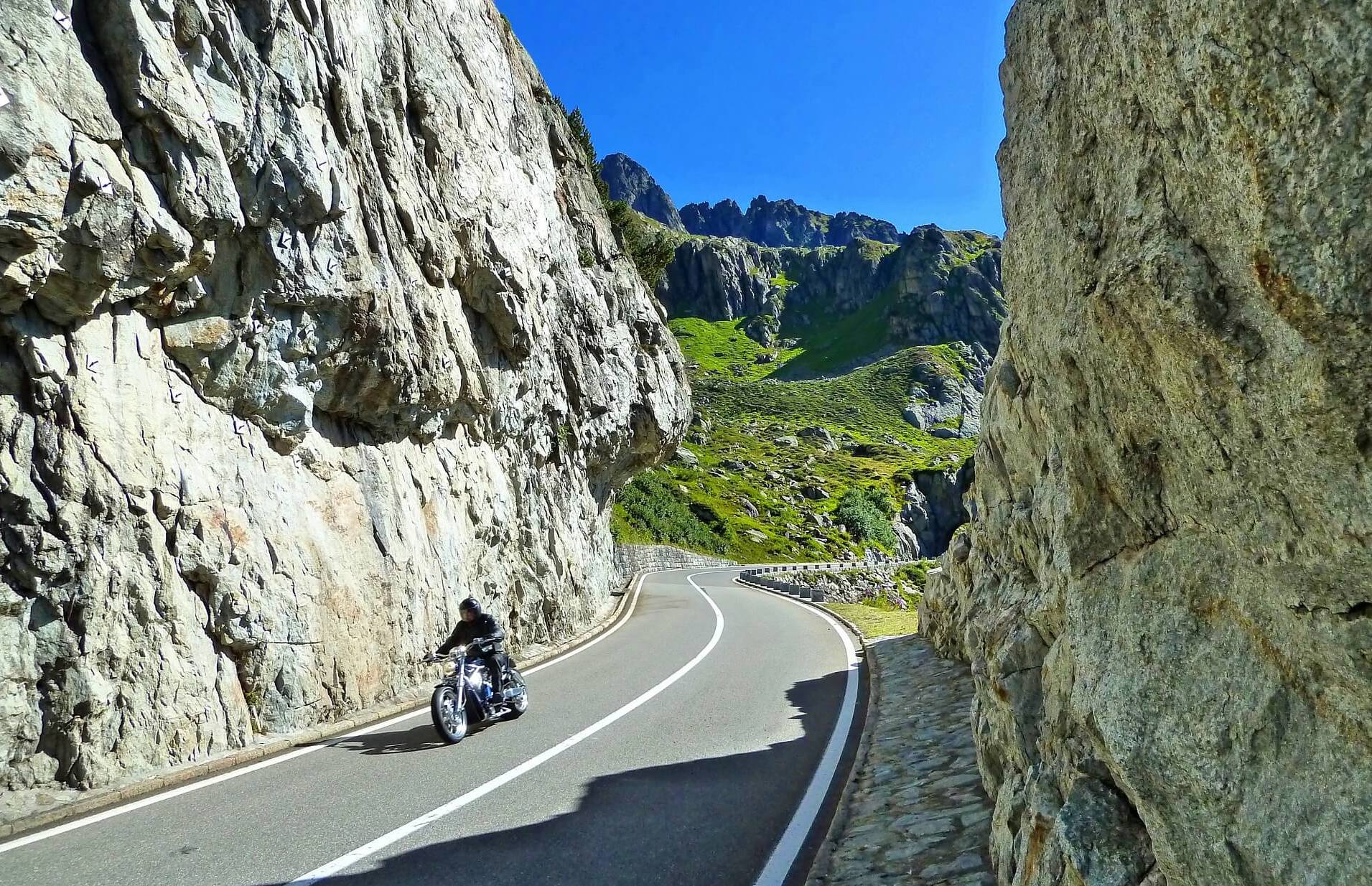 The Best Motorcycle Trips Around the World

Challenging bends, spectacular scenery and biker-friendly pit stops all come together to make an unforgettable motorcycle tour. The team at Infinity Motorcycles are of course no strangers to the thrill of the open road and we often get asked about our favourite routes, both here in the UK and further afield. It may have been tough but we’ve managed to narrow it down. Here are our top 10 greatest motorcycle routes.

Best motorcycling roads in the UK

Despite being named as one of the most dangerous roads in the country and given a 50mph speed limit, The Cat and Fiddle Road is still one of the most popular routes with motorcyclists in the UK. Looking at the challenging bends, smooth tarmac and spectacular views we can easily see why this Peak District run between Buxton and Macclesfield remains a firm favourite.

Not for the faint-hearted, the Hardknott Pass runs through the heart of the Lake District between Eskdale and Duddon Valley. The joint steepest road in the UK at 33%, this scary single-track route is a challenge for even the most experienced rider. Expect hairpin bends, extreme gradients and some of the most spectacular views the Lake District has to offer.

Ending at the world-famous Giant's Causeway, the A2 in Northern Ireland showcases 60 miles of spectacular coastal scenery. The road is extremely biker friendly and as you travel along the coast there are plenty of fishing villages and secluded coves to make a pitstop.

Rumoured to be a popular route with motorcycle icon Joey Dunlop and home to the NW200 road race, it’s the perfect place to enjoy your own time trial experience. Just don’t forget the speed cameras!

Scotland's answer to Route 66, this famous highland motorcycle route dishes out 500 miles of Scotland’s finest coastal scenery. Smooth bends, single-track roads and countless photo stops makes this a must-do ride. Get into the heart of Scottish history and mythology with castles, beaches and ancient ruins.

A great route for novice riders, The Horseshoe Pass is the ideal introduction to motorcycle touring. Aptly named because of the shape of the road as it winds around the valley, you can expect a picturesque landscape and more than your fair share of sheep on the road from Llandegla to Llangollen!  At 1,400 ft above sea level, the peak is a great place to stop, survey the world and enjoy a hot beverage at the famous biker haunt the Ponderosa Cafe.

Best motorcycling roads in the world

The Great Ocean Road has a reputation worldwide as one of the ultimate coastal roads. Enjoy tourist gems such as the iconic Twelve Apostles and Port Fairy, or hunt out isolated beaches for a change of pace. Running 150 miles along Victoria’s south east coast, from Torquay to Allansford, The Great Ocean road is the largest war memorial in the world and is dedicated to Australian comrades killed during World War One.

For those adventure riders out there, Argentina’s Ruta 40 parallels the Andes for 3,100 miles, running from the bottom of Bolivia to Tierra del Fuego at the tip of the continent. One of the longest routes in the world, Ruta 40 covers a multitude of regions ranging from mountains, plains, and coastlines. Make the most of tarmacked roads in the north as it won’t be long until the dirt roads begin and the true test of endurance starts.

One of the more unusual routes on our list is Norway’s Atlantic Ocean Road. Named the best drive in the world by the Guardian in 2006, County Road 64 connects an archipelago of small islands and skerries via bridges, causeways and viaducts, including Storseisundet Bridge, the famous ‘Bridge to Nowhere’ - it’s a photo opportunity you definitely won't want to miss!

Near enough the furthest you can get from the UK, Arthur’s Pass is a spectacular mountain route in New Zealand’s Southern Alps. Experience the best of the South Island and ride the 160-mile State Highway 57 from Christchurch on the east coast to Greymouth on the west.

The route follows State Highway 73 west across river plains before climbing to ride through Porters Pass and the iconic Arthur’s Pass National Park. Highlights of this motorcycle tour includes the impressive Waimakariri and Otira River gorges and the Otira Viaduct.

Experience the best that the U.S.A has to offer with this 520-mile route. This iconic run takes you on a winding road through diverse landscapes of redwood forests, beaches, cliffs and seaside towns.

Taking you from Los Angeles through to San Francisco, the Pacific Coast Highway, or Route 1 is one of the greatest American road trips. Experience the Olympic Peninsula, the rugged Big Sur, Malibu, biker-friendly Seattle, San Francisco and San Diego. USA, tick!

We’re always on the hunt for new motorcycle routes and tours. Let us know your favourite on Twitter at @InfinityMoto

Infinity Motorcycles stocks a range of motorcycle luggage from renowned brands such as Kriega, Bagster and Oxford. Want to talk about your upcoming trip with one of our Infinity team? Feel free to give us a call or visit one of our 15 stores around the UK.

Packing For a Motorcycle Tour

A Guide to Motorcycling in France

A Motorcyclists' Guide to Layering