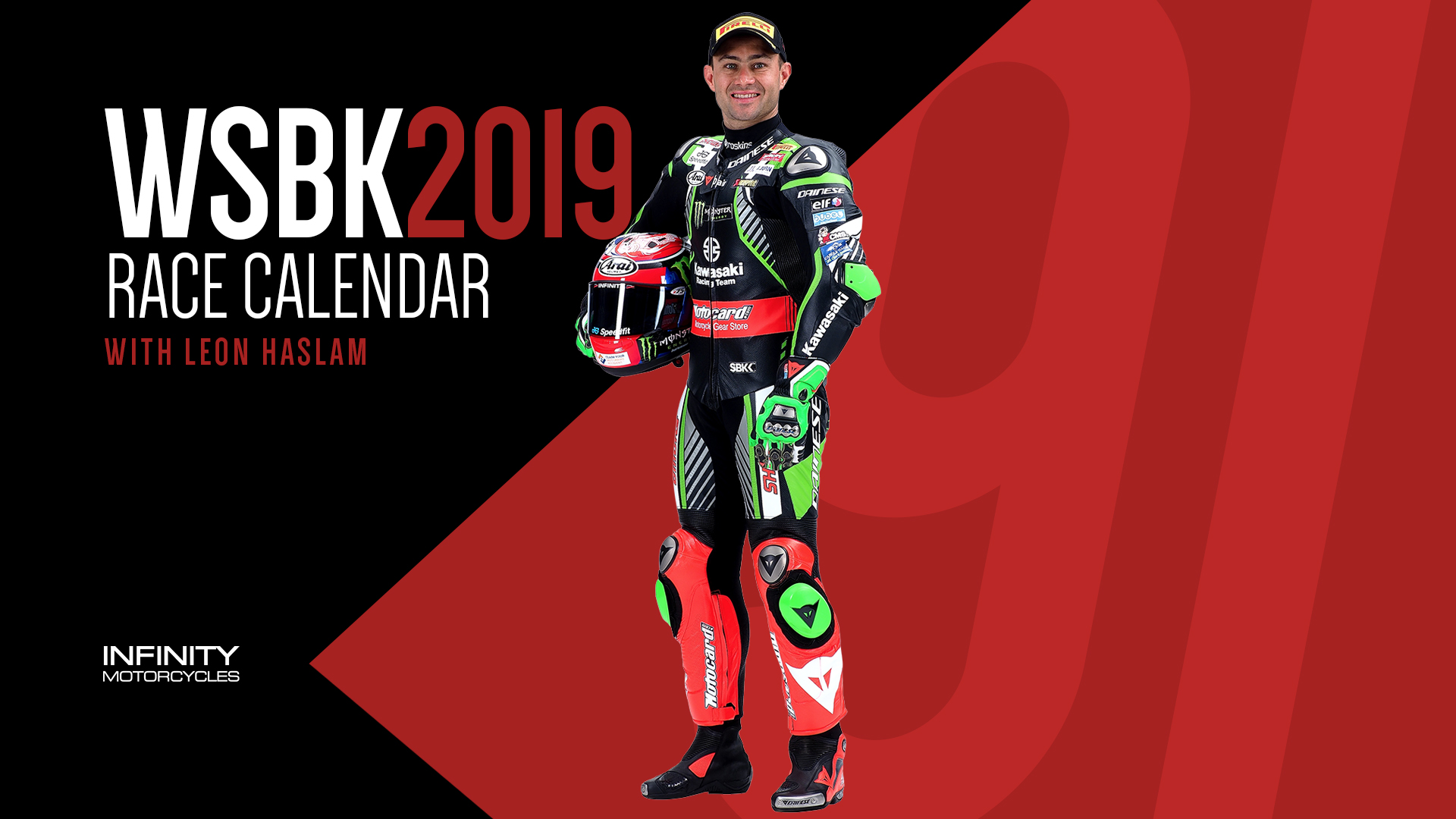 One of the most fiercely competitive series worldwide, the FIM Superbike World Championship is back! Check out the 2019 WSBK calendar, take a look at the tracks and watch the results as they come in.

The 13-round series is drumming up plenty of drama, heartache and triumph with 26 riders for a position in the championship with the single goal of winning the coveted team title.

Kicking off in Australia's Phillip Island, the Championship will head to Thailand three weeks later, and then take place in world-famous circuits around the world, culminating in a final round in Qatar on the weekend October 24th - 26th.

Leon Haslam, sponsored by Infinity Motorcycles and last season's British Superbike Champion, returns to WSBK for the first time since 2015 and hopes to take his fine form and challenge for World Superbike podium.

Keep up to date with Infinity, as we follow Leon's season at each round of the championship and give you the results as they happen!

Current Standings (As of end of Round 9) 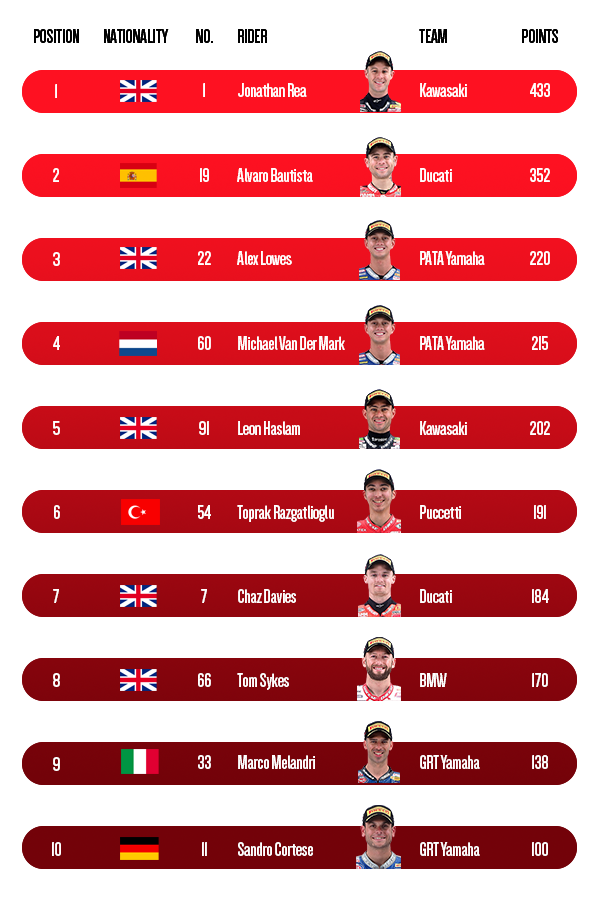 Round 1 - Yamaha Finance Australian Round

The beautiful Phillip Island circuit on the Bass Straight, off the coast of Victoria in Australia, is one of the most iconic and exciting venues in world motorsport. WorldSBK™ first raced at Phillip Island in 1990, just after the first MotoGP™ visit in 1989.

That Australia has produced so many stars of two-wheel racing, such as Wayne Gardner, Mick Doohan, Troy Bayliss, Troy Corser and Casey Stoner, is a testament to the country’s rich motorcycle racing heritage.

READ OUR FULL SYNOPSIS OF ROUND 1 HERE

Round 2 - Pirelli Thai Round

In March 2015 Thailand became the latest Asian country to play host to WorldSBK™ at the new state-of-the-art Chang International Circuit. The venue was opened in 2014 earning FIM Grade A and FIA Grade 1 classifications, with the owners striving to attract the biggest names in two and four-wheel motorsports.

The historic first WorldSBK™ visit to Thailand in 2015 was totally dominated by Jonathan Rea as he took pole position, a double win and both fastest laps, leading every lap of both races. Since then Thailand has become a permanent fixture on the calendar and is a popular destination amongst riders and fans.

READ OUR FULL SYNOPSIS OF ROUND 2 HERE

A truly state-of-the-art venue, the MotorLand Aragon road racing circuit was opened in 2009, to continue the rich local heritage of racing which had seen years of exciting street races in nearby Alcañiz, which hosted events between 1963 and 2003.

In 2011, MotorLand became the fifth Spanish track to host the WorldSBK™ Championship and the first visit of the series to the circuit saw Spaniard Carlos Checa finish on the podium in third place in Race 2. That year Checa rode his Ducati to title glory becoming the first Spaniard to win the WorldSBK™ title.

READ OUR FULL SYNOPSIS OF ROUND 3 HERE

'The Cathedral' of motorcycle racing as it is known colloquially, Assen has an almost unrivalled history in motorsport, being the only venue to have held a round of the MotoGP™ World Championship every year since its creation in 1949. It has also been hosting WorldSBK races since 1992, and celebrated its 25th anniversary as a Superbike venue in 2016.

Assen is a big favourite with the riders given its prestige and race weekends are thoroughly enjoyed by the fans as they revel in the festival atmosphere.

READ OUR FULL SYNOPSIS OF ROUND 4 HERE

Round 5 - Pirelli Italian Round

In recent seasons Imola has become a regular fixture on the WorldSBK calendar and it produces exciting racing in front of the enthusiastic Italian fans. Imola’s full title is the Autodromo Internazionale Enzo e Dino Ferrari and the circuit’s first foundation stone was laid in March 1950, with Enzo Ferrari himself present.

As for Italy as a country it has a passion for producing, riding and racing motorcycles and has provided some of the sport’s greatest names including Giacomo Agostini and Valentino Rossi, not forgetting double WorldSBK champion Max Biaggi.

READ OUR FULL SYNOPSIS OF ROUND 5 HERE

Round 6 - Acerbis Spanish Round

The Spanish circuits of Albacete, Aragon, Jarama and Valencia have all hosted WorldSBK races and the Circuito de Jerez - Angel Nieto in the beautiful southern region of Andalusia first appeared on the calendar for a single season in 1990. In 2013 the series returned to the brilliant 4.4km Jerez track.

The passionate and knowledgeable crowds at Jerez create a party atmosphere which is something to cherish and Spain as a nation has produced many great riders over the years, including 2011 WorldSBK title winner Carlos Checa.

READ OUR FULL SYNOPSIS OF ROUND 6 HERE

Round 7 - Pata Riviera Di Rimini Round

Along with circuits such as Phillip Island, Assen and Donington, this is one of the ‘classic’ WorldSBK venues with the championship having visited the Italian track very consistently over the decades. The first time WorldSBK raced at Misano was in 1991 with Doug Polen winning both races from pole on his Ducati en route to the first of his two World titles.

The late Marco Simoncelli was from the nearby town of Cattolica and the local region has produced a number of the sport’s top names, including Valentino Rossi, Andrea Dovizioso and Marco Melandri.

READ OUR FULL SYNOPSIS OF ROUND 7 HERE

Round 8 - Prosecco DOC UK Round

Exclusive to WorldSBK, the Paddock Show is back bigger than ever before. With more opportunity to meet the riders, win official WorldSBK goodies, sit and have a photo on the many replica machines on display and an all new SuperShow on Saturday. More than two hours of entertainment involving riders from all classes, you won’t want to miss any of the on-stage action and autograph sessions.

READ OUR FULL SYNOPSIS OF ROUND 8 HERE

Round 9 - Geico US Round

WorldSBK has a long history of racing in the USA, with Miller Motorsports Park (Utah) and Brainerd International Raceway (Minnesota) having hosted races in addition to WeatherTech Raceway Laguna Seca in California, which hosted the championship from 1995 to 2004 and returned to the calendar from 2013 to remain to the present day.

Laguna Seca’s exciting layout around the hillsides of Salinas on the Monterrey Peninsula includes the thrilling Corkscrew section and racing here can be traced back to the 1950s. The US boasts a wonderful motorcycle racing heritage with great champions such as Kenny Roberts, Freddie Spencer, Eddie Lawson, Wayne Rainey, Kevin Schwantz and Nicky Hayden in Grand Prix racing and with World Champions such as Fred Merkel, Doug Polen, Scott Russell, John Kocinski and Colin Edwards in WorldSBK.

READ OUR FULL SYNOPSIS OF ROUND 9 HERE

In the early years of WorldSBK the championship visited Portugal on two occasions with four races held at the Estoril track, in the 1988 and 1993 seasons. The series returned to the western European country in 2008 at the new 100,000 capacity Algarve International Circuit close to Portimão on the Atlantic Ocean.

Several riders from Portugal have competed in WorldSBK over the years, the most successful of them being Alex Vieira, the only Portuguese to have won a race in the series, at the Osterreichring in 1989 (Race 1) and to start from pole - at Hockenheim in 1988.

The Magny-Cours circuit first appeared on the WorldSBK calendar for a single year in 1991 but since 2003 has been a regular fixture, as the series makes the journey each season to the 90,000 capacity venue near the towns of Magny-Cours and Nevers, some 250km (160 miles) to the south of Paris. The championship has also briefly visited both Paul Ricard and Le Mans, whilst riders such as Regis Laconi, Sebastien Gimbert and Raymond Roche have represented France in WorldSBK, with the latter winning the 1990 title.

Round 12 - Motul Argentinean Round

WorldSBK™  arrived in Argentina in 2018, with the San Juan Villicum circuit in the western province of San Juan becoming the host venue for the Motul Argentinian Round.
San Juan, with its Circuito San Juan Villicum and after being part of other events, has become one of the main motorsport venues of Argentina. Its mainly mountainous relief interspersed by valleys and crossings under a mild dry climate makes it an ideal place for all kind of sportive activities.

The annual WorldSBK visit to Qatar is a spectacular event, with the action taking place at night under the floodlights of the superb Losail International Circuit, located around 30km outside Doha, in the Qatari desert. Qatar has become the season-ending round in recent seasons, with titles often on the line as the riders do battle around the 5.4km track.

The first WorldSBK round held in Qatar was in 2005, with Troy Corser winning Race 1 on the Suzuki GSXR1000 K5 and his teammate Yukio Kagayama emerging victorious from Race 2. Qatar stayed on the calendar until 2009, returning in 2014 and remaining on the schedule ever since.